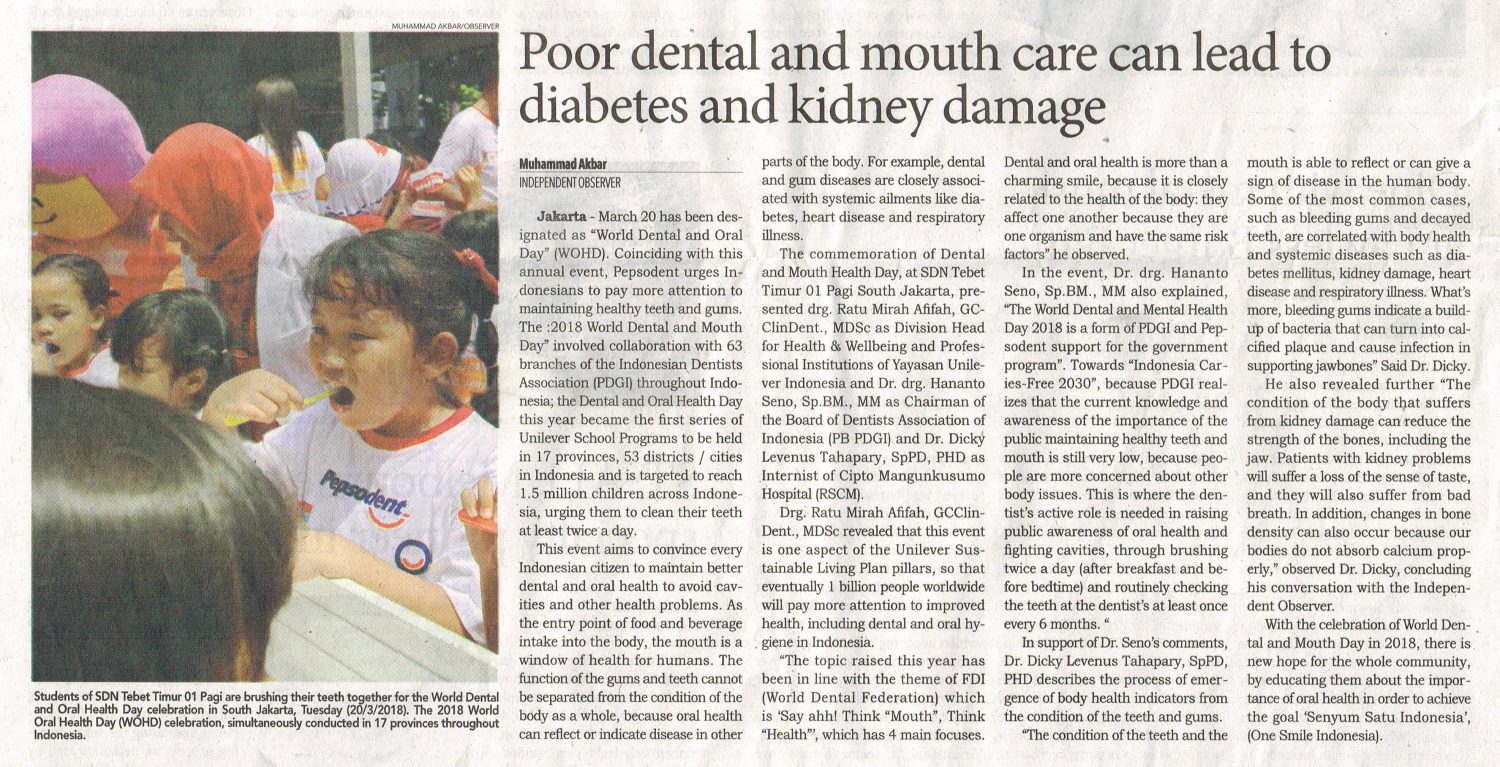 Jakarta-March 20 has been designated as “World Dental and Oral Day”(WOHD). Coinciding with this annual event, Pepsodent urges Indonesians to pay more attention to maintaining healthy teeth and hums. The:2018 World Dental and Mouth Day”involved collaboration with 63 branches of Indonesian Dentist Assosiacion(PDGI) throughout Indonesia ;the Dental and Oral Health Day this year became the first series of Unilever School Program to be held in 17 provinces, 53 districts or cities in Indonesia and is targeted to reach 1.5 million children across Indonesia, urging them to clean their teeth at least twice a day.

This event aims to convince every Indonesian citizen to maintain better dental and oral health to avoid cavities and other health problems. As the entry point of food and beverages intake into the body, mouth is a window of health for humans. The function os the gums and teeth cannot be seperated from the condiiton of the body as a whole, becuase oral health can reflect or indicate disease in other parts of the body. For example, dental and gum disease ar closely associated with systmatic ailments like diabetes, heart disease and respiratory illness.

Drg. Ratu Mirah Afifah, GCClinDent.,MDSc revealed that this event is one aspect of the unilever Sustainable Living plan pillars, so that eventually 1 billion people worldwide will pay more attention to improved health, including dental and oral hygiene in Indonesia.

“The topic raised this year has been in line with the theme of FDI(World Dental Federation) which is ‘Say ahh! Think”Mouth”, think “health”, which has 4 main focuses. Dental and oral health is more important than a charming smile, because it is clossely related to the health of the health of the body: they affect one another becuase they are one organism and have the same risk factors” he observed.

In the event, Dr. drg Hananto Seno, Sp. BM.,MM also explained, “The World Dental and Mental health Day 2018 is a form of Pdgi and Pepsodent support for the government program”.Towards “Indonesia Caries- free 2030”, because PDGI realizes that the current knowledge and awareness of the importance of the public maintaining healthy teeth and mouth is still very low, because people are more concerned about other body issues. This is where the dentist’s active role is needed in raising awareness of oral health and fighting cavities, through brushing teeth twice a day( after breakfast and before bedtime) and routinely checking the teeth at the dentist’s at least once every 6 months

In support of Dr. Seno’s comments, Dr. Dicky levenus Tahapary, SpPD PHD Describes the process of emergence of body health indicators from the condition of the teeth and gums.

“the condition of the teeth and the mouth is able to reflect or can give a sign of disease in the human body. Some ·of the  most  common cases, such as bleeding gums and decayed teeth, are correlated with body health and  systemic diseases such as diabetes mellitus, kidney damage, heart disease andrespiratory illness. What’s more, bleeding gums indicate a build­ up of bacteria that can tum into calcified plaque and cause infection in supporting jaw bones”Said Dr. Dicky.

He also revealed further “The condition of the body that suffers from kidney damage can reduce the strength of the bones, including the jaw .Patients with kidney problems will suffer a loss of the sense of taste, and they will also suffer from bad breath. In addition, changes in bone density can also occur because our bodies do not absorb calcium properly, “observed Dr. Dicky, concluding his conversation with the Independent Observer.

With  the  celebration  of  World Dental and Mouth Day in 2018, there is new hope for the whole community, by educating them about the importance of oral health in order to achieve the goal Senyum sehat Indonesia’, (One Smile Indonesia).

Want to join the discussion?
Feel free to contribute!